HARRISON COMES UP SHORT AGAINST FARMINGTON

The Harrison junior class accounted for 59 points in the Goblins’ game with Farmington.

However, the freshman class of Farmington had 32 points which included six in the final minute as Farmington defeated Harrison, 72-66.

Logan Plumlee hit a bucket for the Goblins with 2:07 showing on the clock in the fourth quarter. The basket pulled Harrison within, 65-61.

The Cardinals hit the front end of an one-and-one, but Gatlin James of Harrison finished both ends of his trip to the charity stripe.

Harrison had implemented a press and it resulted in a steal. James came up with the loose ball and was fouled while shooting a layup.

He connected on one of those free throw attempts to make it a 66-64 contest with 1:28 left.

The Goblins sent Layne Taylor of Farmington to the free throw line. The freshman hit both tosses to make it a two-possession contest.

Ethan Edwards cut that back to a one-possession game with his trip to the free throw line for Harrison.

Taylor drove the lane for the Cardinals and nailed a floating shot to push the visitor’s lead to five points.

Edwards had another trip to the line and hit another free throw to pull Harrison within four at 70-66 with 26.1 left.

Taylor hit 2-of-4 free throws in the final 20 seconds to set the final score.

The Goblins fall to 1-2 in conference action. The squad is back in action on Friday with a home game against Berryville.

Harrison doubled up Farmington in the first quarter.

Abe Glidewell started the run with a free throw. Logan Plumlee then drained his third trey of the first quarter.

James had a steal with a layup and then hit two more buckets to set the score at 20-10.

Farmington scored the first six points of the second period, but Edwards stopped that run with a trey.

The Cardinals scored two buckets, but each was answered with a Plumlee score.

Harrison kept Farmington at an arm’s length and even moved ahead by nine points with 2:22 showing after Bryce Bonds scored on a short jumper.

The Goblins didn’t score again the rest of the half and Farmington pulled within, 36-30, at the midway point.

James had his second steal that he converted into a layup to start the third period, but Farmington took its first lead with a 13-3 run over the next three minutes before three points for Harrison came on a Timber Crenwelge 3-pointer.

The Goblins regrouped and reeled off six straight points with Crenwelge, Plumlee and James each scoring two points. Harrison led with one period left, 51-49.

Leading Harrison in scoring was James with 18 points. Plumlee pitched in 17, Glidewell and Crewelge 12 each, Edwards five and Bonds two.

Taylor had 32 for Farmington. 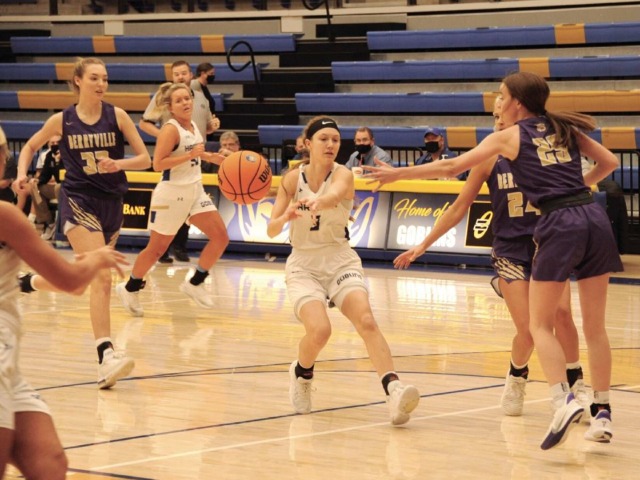