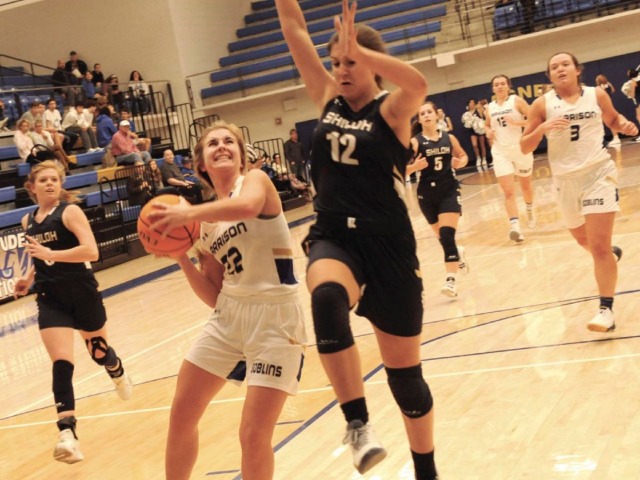 It was apparent who the better team was on Tuesday night at Goblin Arena in senior girls action.

Shiloh Christian had no answer for the Lady Goblins as Harrison extended their winning streak to 16 games with a 57-30 conference win over the Lady Saints.

Harrison opened the game with a pair of buckets from Caroline Cecil and Brynn Oleson.

Shiloh Christian tied the game at four apiece but it would be the closest they would get to the Lady Goblins the rest of the way.

Harrison then went on a 12-2 run to finish the first quarter.

Mariah Hudson scored after a defensive rebound from Cecil followed by Marion Groberg draining a trey from the left win to start the run. Cecil completed a three-point play and the Lady Goblins ended the first period after Oleson took a long rebound the distance for a layup and Kenzie Parker scored on a putback.


Shiloh Christian’s zone defense still had no answers for Harrison in the second period.

Cecil began the second with a 3-pointer while Hudson and Groberg each scored in the paint to extend the run and put Harrison with a 23-6 lead before the Lady Saints hit a shot to end the Lady Goblin’s 19-2 run.

Shiloh Christian managed a pair of 3s before the end of the second half, but Harrison continued to spread the ball around offensively with scores from Hudson, Groberg and a layup at the buzzer from Oleson.

The Lady Saints switched to a man-to-man defense in the second half and the results were the same.

Shiloh Christian got the first bucket of the third period and Harrison responded with a 7-0 run and then a 10-2 run while putting its defense on full display.

Oleson put eight points on the scoreboard in the third with Groberg adding six and Madison Bell three.

The lead continued to grow in the final 8 minutes with Groberg scoring in the paint followed by a free throw and Cecil hitting a jumper. Oleson sank a trey from the right side at the 3:38 mark and then a quick score from Shayne Gilliam gave Harrison a 57-27 advantage and enacted the Arkansas Good Sportsmanship Rule.


Shiloh Christian earned the final three points of the game as Harrison finished with a 57-30 win to improve to 16-1 overall and 2-0 in the 4A-1.