HARRISON RUNS PATRIOTS OUT OF TOWN 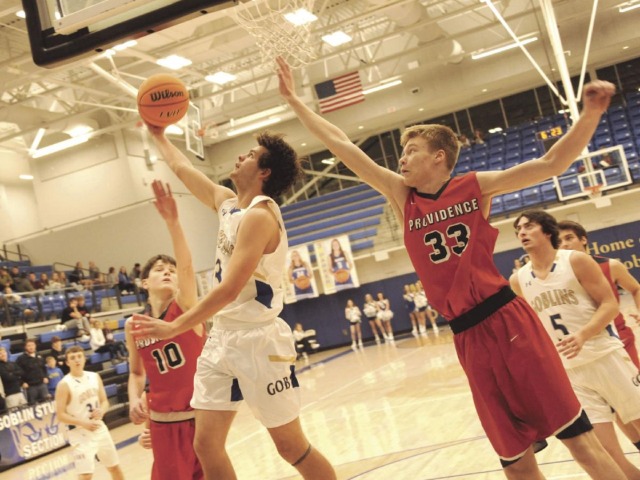 That was the case on Thursday night at Goblin Arena. The Harrison Goblins ended the first half on a run and kept it going through most of the third period on the way to posting a 68-33 non-conference win over Providence Academy.

The Goblins had a 31-18 advantage until the Patriots scored the next six points to cut the Goblin lead to seven with 1:41 left in the second period.

Harrison then started to get points.

Bryce Bonds had an offensive rebound that he stuck back for two points. Ethan Edwards then took a pass from Logan Plumlee to give the Goblins a double digit lead at 35-24.


Ben Elliott was the next to score as he hit a long bomb before Edwards scored on a layup to push Harrison ahead, 40-24.

That lead stuck at the end of the second.

Edwards hit Bonds for a layup before Edwards scored the next three points.

Abe Glidewell scored next for Harrison and Edwards had the next five points with one of those being a trey.

The Patriots scored the next three points, but Plumlee scored off of a pass from Edwards and then had a steal and a layup to end the third period.

Providence Academy started the game with a 5-0 lead.

Coulter McCuistion hit Edwards with an assist that got the Goblins on the scoreboard. Edwards was fouled after making the bucket. He hit the free throw to pull Harrison within two.

After a defensive stop by the Goblins, Elliott hit a reverse layup to tie the contest at 5.

Elliott took a kickout pass from McCuistion to drain a trey. Bonds, Edwards and Elliott each scored a bucket before James hit his first trey of the game to put Harrison ahead, 17-7.


The quarter ended with Elliott banking a trey to give Harrison a 23-14 advantage.

Harrison will be back in action on Tuesday night. The Goblins will host Shiloh Christian in 4A-1 play.