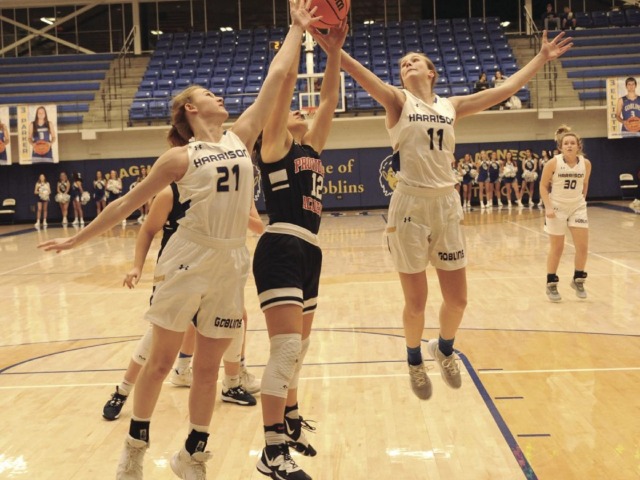 It was the last non-conference game before the 4A-1 starts for the Lady Goblins of Harrison.

When the squad got ready to flex its muscles, the Lady Goblins roared to a 58-43 win over Providence Academy of Rogers.

Harrison had taken a commanding 16-point lead in the second period at 30-14. However, the squad didn’t score again during the last 5:59 of the frame to allow the Lady Patriots to pull within, 30-25, at halftime.

Four straight free throws by Harrison — two by Marion Groberg and two by Mariah Hudson — to start the second half gave Harrison a nine-point lead.

The Lady Patriots scored the next five points to pull as close as they would get the rest of the night at 34-30.


Harrison scored the next 17 points over a 4:01 stretch to take control of the game.

Caroline Cecil started the streak with a 3-pointer. Brynn Oleson had four straight free throws before Hudson drained a trey.

Providence scored to set the third period scoring at 51-32 entering the fourth period.

Harrison then ripped off the next 16 points.

Groberg started the run that was followed by two free throws from Madison Bell. Camryn Casey ended the frame with a bucket to give Harrison a 19-14 lead.

Groberg started the the second with a three-point play. Parker then hit two free throws and stole a Lady Patriot pass to produce a layup.

Groberg and Hudson teamed up again for the next four points with each getting two of those. Harrison led 30-14 at the half.

The Lady Goblins will be back in action on Tuesday night as Shiloh Christian comes to town.