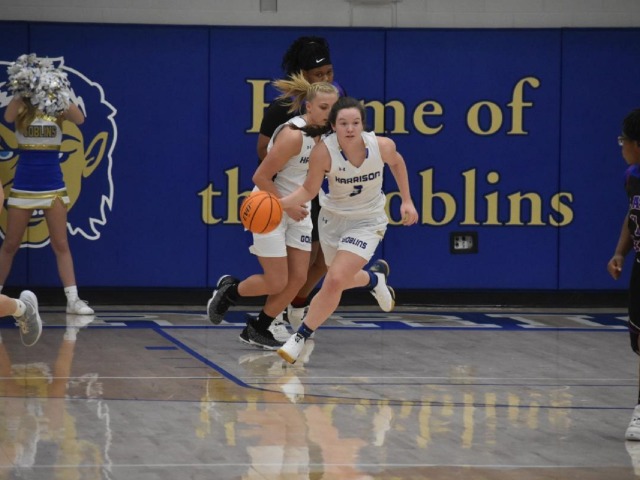 Saturday’s finals of the Lendel Thomas Basketball Classic featured the host team Lady Goblins for the first time in 3 years.

The final game resulted in Harrison’s first senior girls championship in 4 years after the Lady Goblins defeated West Memphis in a close 67-64 ballgame.

Harrison hit 7-of-10 free throws down the stretch to keep the lead on the scoreboard in the final 3 minutes.

Lady Goblin senior Marion Groberg scored Harrison’s final field goal of the game at the 2:48 mark of the second half. On the other end of the court, Caroline Cecil pulled down a defensive rebound and was fouled to put Harrison in the double bonus. Cecil sank both free throws to give the host team a 62-52 lead.


West Memphis quickly hit a 3-pointer and then sent Groberg to the foul line for Harrison. The senior sank both shots to make it a 64-55 ballgame.

Gravette then added another 3 before forcing a turnover and sinking another shot from behind the arc to get within, 64-61.

Mariah Hudson and Brynn Oleson then combined for two points from the foul line to put Harrison ahead, 66-61, with 25.0 remaining in the game.

The Lady Blue Devils never went away with their fourth-straight 3-pointer on their next possession and sent Cecil to the charity stripe with 8.7 seconds remaining. Cecil hit the front end of her trip to the line to end all scoring.

Harrison was able to defend West Memphis’ final attempt to tie the game and the Lady Goblins celebrated with a 67-64 finals win.

Harrison faced a 9-7 deficit at the 11:35 mark of the first half before Groberg drove into the lane and kicked the ball out to Hudson for a 3-pointer on the left wing. The 3 gave the Lady Goblins a 10-9 advantage and they never relinquished the lead the rest of the way.

Kenzie Parker added another six points while Groberg and Hudson continued attacking the basket for points capped by a triple from Cecil at the top of the key to give Harrison a 23-15 edge.

Cecil and teammate Maggie Salmon then added another trey each to match field goals from West Memphis. A pair of freebies by Hudson made it a 31-26 Lady Goblin lead.

Parker and Groberg closed out the first half with a 3-pointer each to give Harrison a 37-28 halftime lead.

Back-and-forth scoring in the second half featured Harrison shooting 15-of-21 from the foul line.


Groberg assisted to Parker for the first score of the second and Cecil followed with her third 3-pointer of the game.

Groberg scored three buckets in the post along with a driving layup from Oleson amongst a barrage of free throws before Harrison took the lead into the final minutes of the game.

Groberg earned Tournament MVP honors with 17 points in the win. Cecil and Parker were each awarded All-Tournament team medals with 15 and 14 points respectively. Hudson finished the game with 11 points, Oleson seven and Salmon three.

The Lady Goblins take their 14-game winning streak into a non-conference matchup with Providence Academy on Thursday at Goblin Arena.

Western Grove earned their first win of the tourney on the last day in a 54-43 victory over Bentonville West, 54-43.

The Lady Warriors got 12 points from senior Hailey Woods and five by Jordyn Jackson in the first half but trailed by a slim 27-26 margin at halftime.

Western Grove shot 15-of-19 from the foul line in the final 16 minutes while outscoring Bentonville West by a 28-16 margin to get the win.

The Lady Goblins stayed undefeated in the tournament to advance to the finals with a 61-34 win over Bentonville West at Goblin Arena.

Harrison racked up 40 points in the first half led by 11 points from Kenzie Parker to take a 40-16 lead at halftime.


Cecil hit three 3-pointers in the second half and Groberg added five points as the Lady Goblins ran away with a lopsided victory.

The Lady Goblins began their day on Friday with a 57-40 win over Earle.

Parker led the way with nine points for Harrison and Oleson scored six as Harrison controlled a 27-16 lead at halftime.

Parker stayed hot with 10 points in the second to go with eight by Groberg as Harrison outscored Earle by a 30-24 score to finish with the win.