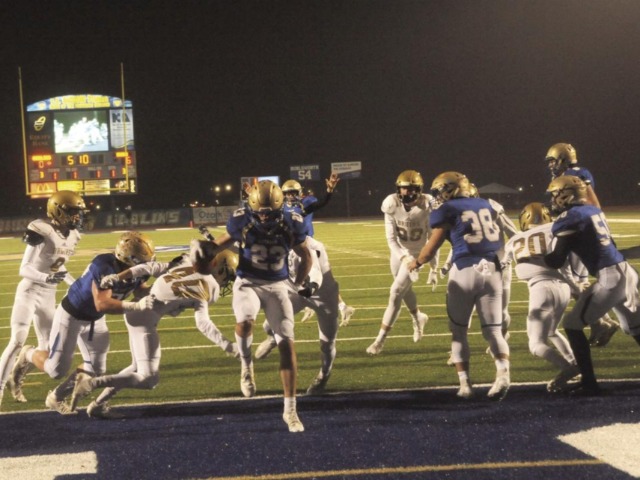 Harrison Goblin football finished the 2019 season the way it had the previous two years, with a loss to the Bruins of Pulaski Academy in the Class 5A State Football Playoffs.

The Goblin defense held the Bruins to their lowest point total of the season at 28 points. Harrison intercepted a pass late in the fourth quarter and forced the Bruins to turn the ball over on downs a total of four times including a goal-line stand early in the game.

Despite the Goblins being able to limit the points produced by the Bruins, Harrison’s three touchdowns in the ballgame were not enough in a 28-21 home loss to end the season.


“Our kids gave all they had,” Harrison head coach Joel Wells commented after the game. “Our heart can not be questioned by anyone. This team is made up of a bunch of winners! They played their hearts out.”

Pulaski Academy won the total yards battle by a 489-204 margin but Harrison was in the ballgame until the very end with several chances to take a late lead.

“We had a game plan on both offense and defense to confuse and limit the possessions of the game,” Wells mentioned. “Our plan worked to perfection, we just couldn't make a play at the end.

“Our defensive coaches staff did a fantastic job of putting together a plan and sticking to it,” continued the coach. “We forced them to run the football and that is not what they want to do. I’m very proud of our defense coaches and players.”

Both teams scored on their first possession of the game. Harrison senior Gabe Huskey scored the first Goblin touchdown to tie the game at 6 apiece and Max Payne added the PAT to give Harrison a 7-6 early lead.

The Bruins finished the first half with two-straight touchdowns to take a 20-7 lead at halftime.

Harrison responded with the next two scores.

Goblin senior quarterback Ben Johnson ran into the end zone on a keeper to finish the first possession of the third quarter and Huskey scored on a 31-yard scoring run. Payne’s extra point put Harrison ahead, 21-20, with 53.8 seconds remaining in the third.

PA responded on the next possession with a 72-yard scoring drive to retake the lead, 28-21, and Harrison couldn’t get back on the scoreboard the rest of the way.


“Offensively we stuck to the game plan of running the ball and limiting possessions,” said Wells. “Our kids did a great job giving us a chance to win.”

Huskey scored two touchdowns on 18 carries and 107 yards. Johnson added 34 yards on 12 carries and Colin Ballard had one carry for 3 yards.

The closing of the season was felt by everyone in the stadium.

“It’s always hard to end something special,” Wells remarked. “A lot of emotions from all of us. I told them after the game that it was an honor to be their coach and I was extremely proud of what they had accomplished and I would continue to help them in the future in any way that I can.”

The Goblin coach reflected on his time as the football coach.

“It's been a fast 5 years,” said Wells. “Our goal was to put this football program back to being one of the most respected in the state. Both players and coaches have put in countless hours to get this accomplished.”

Wells had lots of appreciation for those who helped along the way.

“I would like to thank the Harrison community and Goblin Nation for the tremendous support of our football program,” Wells finished. “A special thank you to the parents and families that put in a ton of work to make these player’s experience special. Harrison is truly a special place. Friday night was just an example of a community rallying behind a great group of young men who represented them in a very positive way.”