GOBLINS END ANOTHER SEASON AGAINST BRUINS 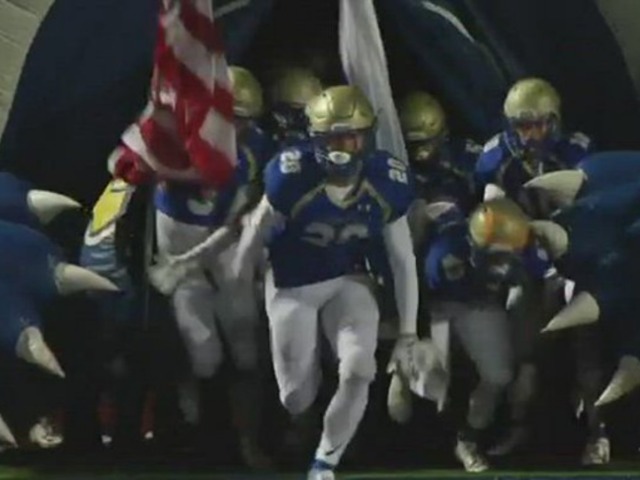 F.S. Garrison Stadium was a packed house on Friday night in support of the Harrison Goblins undefeated run into the Class 5A State Football Playoffs.

For the third-straight year, Harrison’s season came to a close at the hands of Pulaski Academy. The Bruins were flustered at times by the Goblins defense that forced a turnover at a pivotal point in the game, but managed to hold on to a late lead and finished with a 28-21 win to advance with their third win in 3 years over Harrison.

The Goblins entered the second half trailing by a 20-7 margin after giving up a 45-yard touchdown pass to the Bruins in the final seconds of the second quarter.


Harrison was set to receive the kickoff for the second half and senior Colton Shaver fell on the onside kick at the Bruin 35-yard line to get the Goblin momentum rolling.

Ben Johnson completed a short pass to Rilee Jones on a third and long. Jones broke free from tackles and turned the pass into a 17-yard gain for first down.

On another third and long, Johnson busted through the line and was dragged down inches before the goal line for another 17-yard pickup. Johnson finished the drive with a diving keeper into the end zone. Max Payne split the uprights to get the Goblins within, 20-14.

The Goblin defense forced a turnover on downs with 6:35 remaining in the third period that gave the home team the ball on their own 25-yard line.

Harrison ran five-straight run plays before Johnson stepped up in the pocket and delivered a pass to Shaver for a 12-yard gain. Three plays later, the Goblins faced a fourth and one near the red zone. The crowd became electrified and Gabe Huskey responded with a 31-yard rushing touchdown to tie the ballgame with 53.8 seconds remaining in the third period. Payne put the Goblins ahead with the PAT, 21-20.

The Bruins went right back to the passing game and responded with a nine-play drive that covered 72 yards and a score. The two-point conversion was successful and Pulaski Academy took back the lead, ahead 28-21.

The next 10 minutes of the ballgame was a series of errors by both teams.

After a 25-yard completion from Johnson to Shaver down the right sideline, the Goblins turned the ball over on downs to end the possession with a sack in the backfield on fourth down.


The Goblin defense never hung their head and went right back to work. Harrison’s Brooks Both pressured the Bruin quarterback that resulted in an interception grabbed by Bryant Ulrich at midfield.

The next play resulted in Harrison fumbling the ball back to the Bruins.

PA managed to earn two first downs and the Goblins didn’t have enough timeouts to keep the Bruins from taking a knee on two plays to run out the clock.

Harrison finished the season with a 11-1 record after taking a conference championship in the 5A-West and an appearance in the quarterfinals of the playoffs.

Pulaski Academy won the coin toss and opened the game on their own 20-yard line after Payne sent the opening kickoff into the end zone for a touchback.

Harrison responded with a heavy dose of Huskey running the ball. Huskey had five carries for 42 yards and a short touchdown run to put Harrison ahead, 7-6, after Payne’s PAT.

With 7:25 remaining in the second quarter, Harrison made its fourth-straight goal-line stop at the 1-yard line that forced a turnover on downs by the Bruins.

The Goblins could never get out of their own endzone and were forced to punt the ball back.

Pulaski Academy turned the short field into a scoring opportunity over the next five plays and 39 yards to go ahead, 14-7.

The Bruins followed the score with a successful onside kick before turning the ball over on downs as a light drizzle began to fall on F.S. Garrison Stadium.

Harrison’s final possession of the first half resulted in a four-and-out that gave the Bruins 27.6 seconds to score before halftime.


The visiting team did just that over six plays that ended with a 45-yard pass before time expired in the second quarter.