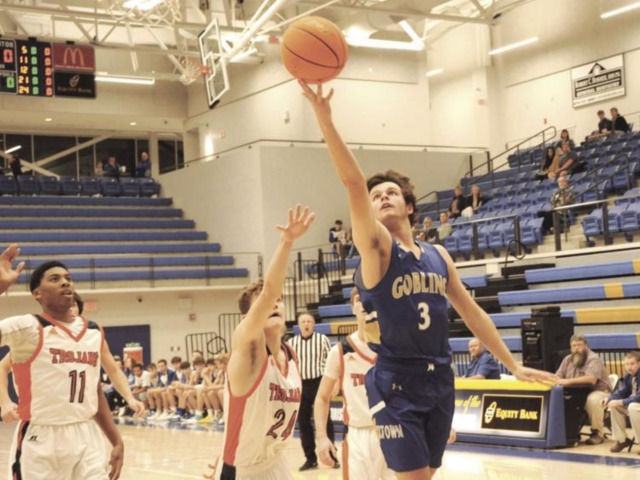 The Pirates of Branson, Mo. crossed the state line to play Harrison and traveled back home with the only number on their record representing a 70-47 loss to the Goblins.

In junior high action, the Junior Goblins defeated Branson by a 36-25 score.

A highly productive third quarter helped the Goblins extend the lead and run away with a 70-47 win over the Pirates.

Harrison senior point guard Ben Elliott drove the right baseline for the first score of the game and teammate Bryce Bonds added a free throw on the next possession.


Branson responded to both scores with field goals of its own to take a 4-3 lead.

It proved to be the only lead that the Pirates would see for the remainder of the game.

Ethan Edwards entered the game for the Goblins and scored quickly with a baseline jumper. Elliott then hit back-to-back 3-pointers to push an 11-6 advantage for Harrison.

Sophomore Timber Crenwelge then assisted to Abe Glidewell for a basket in the paint followed by Elliott’s third trey of the first period to give Harrison a 17-11 edge at the end of the first quarter.

The Pirates began the second frame with two-straight 3-pointers to tie the game at 17 apiece.

Elliott scored by driving the lane and Coulter McCuistion hit a 3 on the next possession to begin building another lead for the Goblins.

Harrison ended the second quarter on a 7-0 run that began with Glidewell pushing the ball in the paint and spinning around a defender for an off balanced bucket.

Bonds sank a pair of free throws and Elliott knocked down his fourth long bomb from the top of the key.

The halftime advantage went to Harrison with a 29-21 lead.

Harrison caught fire coming out of intermission and outscored the Pirates by a 24-13 margin.

Bonds started the quarter with the first of his two 3-pointers of the frame to go along with a layup assisted by McCuistion.

Elliott was limited to one field goal and three free throws but Edwards scored 10 points including a 3 from the top of the key and a driving score and one.

The Goblins built a 53-34 advantage entering the fourth period.

Edwards scored from the charity stripe to begin the fourth and Elliott stayed aggressive to score the next seven points by driving into the paint and earning trips to the line including a three-point play.


Gatlin James then buried a triple from the left wing followed by a steal by Bonds. Bonds kicked the ball ahead to Edwards for an easy layup to give Harrison a 66-40 edge over the Pirates and their largest lead of the game.

Harrison’s next possession pumped up the crowd when Elliott drove into the lane and assisted to Bonds with a no-look pass behind his head.

Logan Plumlee scored the final bucket for the Goblins with 44.0 seconds remaining with a driving score.

Goblin Arena opened the night with the Junior Goblins taking a 36-25 win over the Junior Pirates.

Another nine points in the second gave the Junior Goblins an 18-10 lead at halftime.

The lead increased to a 24-13 score at the end of the third and both teams put up 12 points in the fourth.