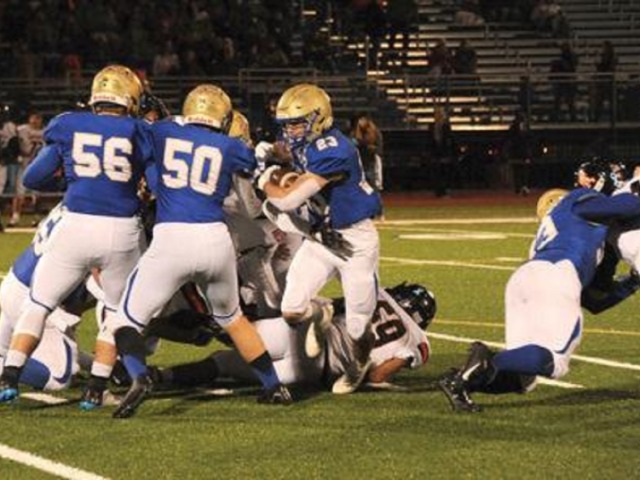 Eight teams remain in the Class 5A State Football Playoffs. Being in contention at this point in the year means you’re a good football team. Hosting the ballgames in your own stadium means you’ve taken care of business during the course of the season.

The Golden Goblins of Harrison fit all those narratives.

After Friday’s games in the playoffs, the field will be narrowed down to four.

If the Goblins hope to be in that limited group of teams, they will have to get past the Bruins of Pulaski Academy.

PA has been to the finals of the playoffs for the last 5 years and have defeated Harrison the past two years on their way to War Memorial in Little Rock.


Harrison head football coach Joel Wells believes that experience is the greatest teacher and the Goblin roster is loaded with it.

“We have seen them twice,” Wells commented on his teams experience. “We have a lot of players that played in the game last year and understand how they play and what we need to do to win.”

The Goblin coach overflows with confidence when reflecting on the ability of his team and what they are capable of doing. He also didn’t see this game as an opportunity to make a statement.

“I think our team has already made a statement,” answered the coach. “It’s a great opportunity for our team. I think we understand what’s at stake and we will play well. This game, win or lose will not define our team. We have a great group of young men who represent our school and town in a positive way. This game would be a big win, but the state championship is the goal and this is just a step to get there.”

The Goblin players reflect their coach when it comes to preparation and determination.

“We have had guys watch as much as 8 hours of film on their own,” Wells replied to how his team has impressed him in preparing for this game. “No one can question this groups will to win. They have won 23 and lost 1 in two years. You can't accomplish that without great determination.”


Wells acknowledged that the Bruins are a tough team to prepare for.

“They are very difficult to prepare for in all phases,” said the coach. “They are very unconventional in many ways. They make you do things different in preparation for them. And add the fact that they have great players makes it even harder.”

With an average margin of victory just over 28 points this season, the Goblins have only played two games this season that ended with a one-possession game. The last one was six weeks ago in a 17-15 win at Vilonia.

Harrison has planned for playing in the fourth quarter since well before the season began and believes they’re ready.

“That prep started last winter,” Wells responded to how he will have the Goblins ready for the final 12 minutes of the game. “Our players will be ready for the fourth. We will play a bunch of players in this game. The pace will be fast and we understand the fatigue factor.”

Wells identified controlling the pace of the game on offense, winning special teams and creating turnovers on defense as being the keys to a Goblin victory on Friday.

The Harrison coach has kept it simple when stressing to the players his message about this week’s challenge.


“We have stressed to our kids to cut it loose and have fun,” Wells said. “There is no pressure on our kids, everyone in the state thinks we are the underdog, but our kids believe in themselves.”

F.S. Garrison Stadium will be a packed house for the second-straight playoff game and the Harrison coach now expects to earn home-field advantage, “Having home playoff games should be the norm for Harrison. This will be a great atmosphere for high school football.”

Wells concluded with his thoughts on tonight’s challenge with the Bruins and what he has taught to his team through the season.

“Many times in these young men's lives they will be faced with challenges,” said the coach. “Football is just a tool from which they learn how to prepare and overcome difficult obstacles. This is what all the work in the offseason is for. We are going to play hard, have fun and compete like we do every week. Go Gobs!”

The quarterfinal game will kick off at 7 p.m.

Follow the quarter by quarter scoring on the Daily Times Facebook page. A complete game story will be in Saturday’s edition of the Times.