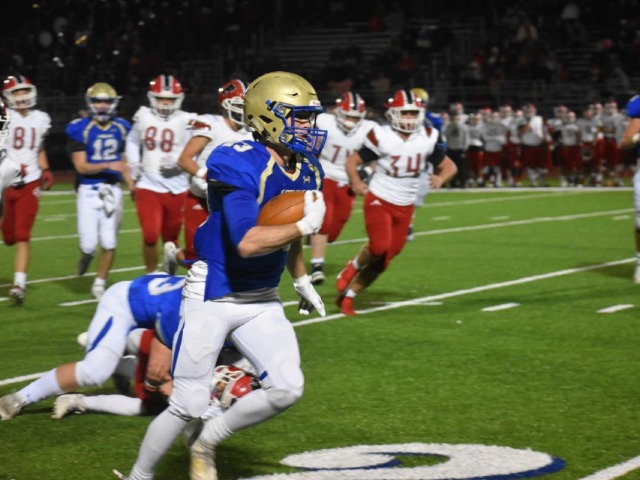 Scoring more than 500 points in a high school basketball career is an accomplishment.

Scoring more than 500 points in a high school football career is very rare.

Friday night, Harrison senior Gabe Huskey topped the 600 point total when he hit the end zone for the 100th time in his football career at Harrison.

Huskey has accomplished the task in 34 games. He played 11 games his sophomore game, but set out Harrison's quarterfinal contest due to a shoulder injury.

The Goblins made a visit to the semifinals last season of the Class 5A State High School Playoffs.

Huskey's teammates have run the table for the second time in a row and finished the season undefeated. Huskey has played very few minutes in the second half because of Harrison's large lead at intermission.

The Goblin senior has carried the football 132 times this season. He has 1,386 yards.

Huskey has one touchdown reception this season. He has eight receptions for 97 yards.

An accomplishment like this is not just about the speedster.

“It’s a great team and individual accomplishment,” said Harrison head coach Joel Wells, who has coached Huskey through his high school career. “In order to accomplish this, a person has to be great and play on a great team.”

“He is a very talented, humble young man,” said the coach. “He will leave a huge legacy behind. One hundred touchdowns is beyond anything most could dream about. I am just glad to have the opportunity to coach him and this team.”

Huskey has a lot of patience waiting for a hole to open.

“He has great vision, speed and the ability to make people miss in the open field,” said Wells. “He has even had a few (touchdowns) called back over the years. This is an unbelievable accomplishment that may stand for years.”

Harrison and Huskey will start the Class 5A State Football Playoffs on Friday. Through the effort during the regular season, the Goblins have home field advantage as long as the squad remains in the tournament. The championship game will be held at War Memorial Stadium in Little Rock.