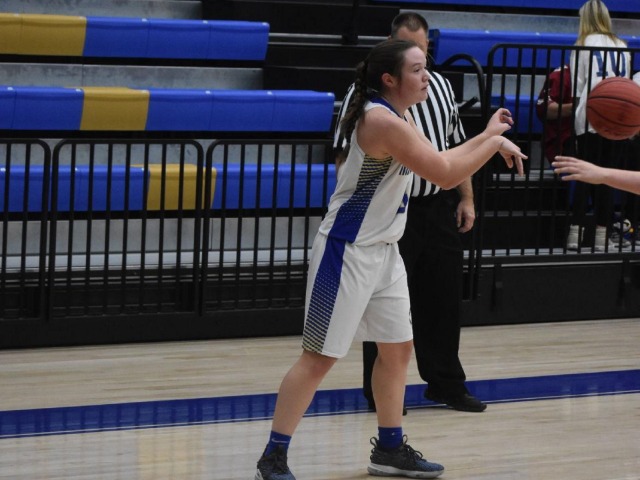 Pottsville showed why they have been a success basketball team in recent years.

Harrison showed what they have the capability to do.

When the final buzzer sounded in Goblin Arena on Friday night, the Harrison Lady Goblins defeated the Lady Apaches 65-43.


Both teams had two big runs in the game. Fortunately for Harrison they were the ones with the last run to claim the victory.

Pottsville had four 3-pointers in the opening 5 minutes of the game. The Lady Apaches hit two free throws to take an 18-8 lead.

Brylie Parker of Harrison cut the deficit into single digits. Sydney Shrum then had a steal and scored on a layup for Harrison. Parker then duplicated Shrum's feat to make it an 18-14 contest.

A pair of Pottsville free throws closed the first period scoring with the Lady Goblins training, 20-14.

The Lady Apaches scored the first points of the second period, but didn't score again as the Harrison defense held Pottsville off the scoreboard.

Caroline Cecil started what would be a 19-0 Harrison run.

Makayla Campbell then drained a trey for Harrison. Parker then scored on a long shot. Brynn Oleson was the next to score after taking a pass from Shrum.

Marion Groberg continued the Harrison scoring with two free throws. Then Oleson hit Kenzie Parker with a great pass to give the junior her first points of the game.

The Lady Goblins finished the last 1:13 of the first half with five points. Oleson hit a free throw that was followed by Brylie Parker and Kenzie Parker each scoring.

Pottsville opened the second half with 5-2 run to close to within eight of the Lady Goblins.

Harrison then scored the next nine points with the highlight being a trey by Shrum.

Leading 44-27, Harrison could only watch as the Lady Apaches scored the next 11 points in a row to pull within six points.

Campbell put the Lady Apache run into the books with her second trey of the game. The Lady Goblins led 47-38 after three periods.

Kenzie Parker and Shrum scored to start the fourth period and put Harrison ahead, 51-38.

Pottsville could only get as close as 11 points the rest of the way.

Harrison will play its first 4A-1 home game on Tuesday night. The Lady Goblins will host Berryville, who is the No. 1 in Class 4A.